The fashion celebrity endorsement between Hollywood actress Halle Berry and Deichmann lasted several years. ALPHA POOL accompanied the cooperation from spring 2012 to summer 2013. Part of the campaign were several shootings and a sales event with Halle Berry. In a Berlin Deichmann branch the actress herself stood behind the cash register. She presented the customers with her new shoes.

For the 2012 summer collection, the actress herself stood at the box office and gave the buyers a tip or two. For a short chat the Aktrice was available for the fans. She told them about her shoes. “Stylish, affordable and above all comfortable – that is the recipe for success of my collection,” she enthused about her latest models. In her private life, this is also her concept: “I wear what I like and I wear what is comfortable. I always adapt my shoes to the season, no matter what country I’m in. The shoe must be both beautiful and practical.”

For this reason, she has also passed on a selected part of her collection to her friends. “These days, we women spend so much time on foot. The shoe simply must not pinch. I sent some friends of mine shoes from my first collection, they were so enthusiastic about the comfort. It’s just a great compliment,” explained Mimin.

In addition, Halle Berry generally confessed her great passion for shoes. She revealed why she needed several of her own shoe collections. “There are over 300 pairs in my closet, but in total I have over 1000. For twenty years I’ve been keeping them all, in one storage room. I have a real relationship with them,” she raved about her accessories. It’s understandable that she wanted to create her own line.

Deichmann launched the second campaign with Halle Berry in cooperation with ALPHA POOL for the 2012/2013 autumn-winter season in summer 2012, followed by another advertising campaign in winter 2012 for the 2013 summer season. 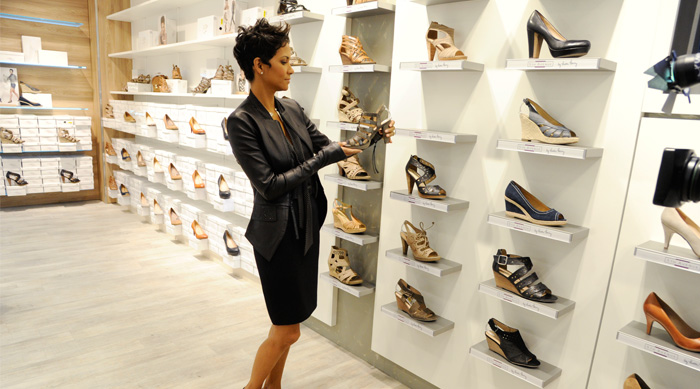